Who would win at Tug of War 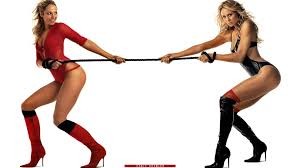 I don’t spend a lot of time in supermarkets but the other day a lady was praising the health benefits of chia seeds  to the cashier and I couldn’t help but overhear that she puts it in everything.
It was informational but as she was going to pay, she said let me get a pack of cigarettes.

Second scenario was a consultation I was doing with a potential client and went over budgetary constraints. I asked how much do you spend on personal upkeep such as hair , nails ? Etc. which is in line with the research .

She said X amount of dollars and thought the number was alittle high. I suggested cutting down to every 10 days instead of 7 which would allow her to afford the program and make long term change ; not short lived change. I decided she wasn’t a good fit for my program.

The official FitBox release is coming soon so contact me if you want to get in early.

Letters and samples going out for the Body By Vi opportunity , if you want more info , get a hold of me.